The Mariannenplatz was blue, so many cops were there, and Mensch Meier was in tears, probably caused by the tear gas. Und he asked someone: "Say, is this a party going on here?" - "Sort of", one said "they are squatting the Bethanien."

roughly translated lyrics of the 'Rauch-Haus-Song' by Ton Steine Scherben, 1972

The Mar­i­an­nen­platz is a big park-like square near the north­ern edge of the dis­trict Kreuzberg. The most famous address at the place would be the ‚Kün­stler­haus Bethanien’, a former hos­pi­tal, later squat, that now houses many social and cul­tural projects. 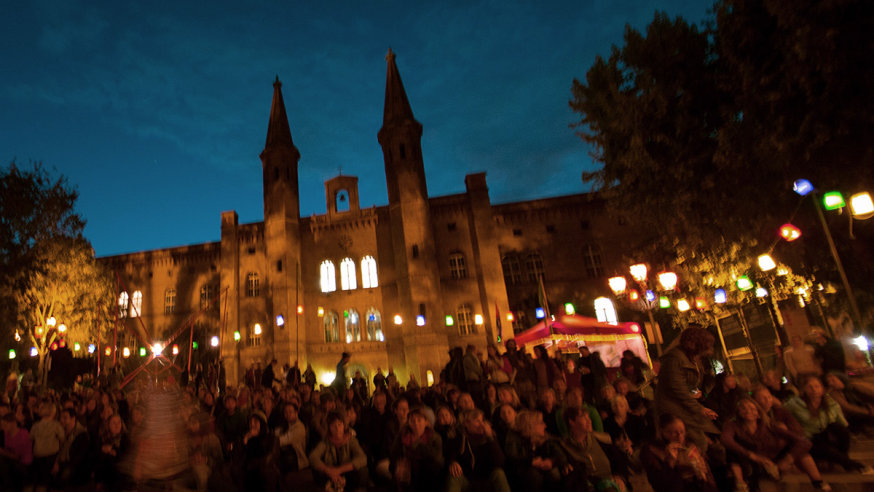 Recently the Mar­i­an­nen­platz was known for being the center of heavy May Day riots that were suc­cess­fully restrained by a huge family fes­ti­val (the ‚Myfest’), orga­nized by a pool of local groups.
The riots in this area have a long his­tory, though - it all dates back to the 1848 rev­o­lu­tions where many work­ers were shot in a riot. From 1961 to 1989 the Mar­i­an­nen­platz directly adjoined the Berlin Wall. This has always been a place where strong con­flicts became manifest.

For­tu­nately, the pos­i­tive spirit has won. :)

The very first (suc­cess­ful) squat­tingin Berlin took place at the Mar­i­an­nen­platz in 1971.

In this doc­u­men­tary you can get an idea of the move­ment and why this was the begin­ning of a new epoch. The West-Berlin kids started to develop a new self-esteem - soon inspir­ing the youths in the whole country.

The move­ment that started here soon grew some kind of influ­ence even on the youths of the GDR who sat behind a con­crete wall. After the fall of the wall the ‚squat­ting cul­ture’ sig­nif­i­cantly shaped the face, art and cul­ture of the new, re-united Berlin.

But the noto­ri­ous ‚obsti­nate’ atti­tude that seems to radi­ate from this place and is still gras­pable may have it’s ori­gins a lot ear­lier in his­tory. The square was named after Princess Mar­i­anne of Orange-Nassau, who report­edly was much more self-confident and unusu­ally pro­gres­sive than women were allowed to be in her time. She left her unfaith­ful hus­band to elope with her coach­man - a slap in the male-dominated pruss­ian face. :P
Then she bought a castle, made it a museum and a cul­tural center and sup­ported local artist. Mar­i­anne and the squat­ters obvi­ously were inspired by very sim­i­lar spir­its! She was banned from here home­land Prussia.

The Mar­i­an­nen­platz has a tur­bu­lent and sym­pa­thetic his­tory. What is YOUR his­tory with this place?